Write to your embassy or consulate in Iraqi Kurdistan and ask them to urge the Iraqi Kurdish government to guarantee Sherwan Sherwani, Guhdar Zebari, Eyaz Karam, Hariwan Essa, and Shivan Saeed a fair trial.

Sherwan Sherwani, Guhdar Zebari, Eyaz Karam, Hariwan Essa, and Shivan Saeed, journalists and civil rights activists from the Badinan Region of Iraqi Kurdistan, were sentenced to a six-year prison term. They were arrested six months ago, and claim the investigators tortured them during their detention. In an unfair trial on February 16, the Criminal Court of Erbil found them guilty on charges of “espionage” and “conspiracy to destabilize national security and stability.”

Members of Christian Peacemaker Teams observed the two-day-long trial and found out that the prosecution did not present any evidence to sustain the accusations. Additionally, the judge ruled that since several of the journalists and civil rights activists spoke to international organizations, the United Nations, and the United States Consulate General, about the current situation of human rights in Iraqi Kurdistan meant they were spies working for foreign governments.

The extremity of the sentence against the five and their families for defending human rights, exposing corruption, and taking part in peaceful protests create a dangerous precedent that targets the fundamentals of human rights, threatens independent journalism, and curbs the initiatives of Iraqi Kurdistan’s civil society.

The five Badinan journalists and activists are on a hunger strike awaiting a response to their appeal from the courts. Along with their families they are hopeful that justice will be on their side. At the same time, they are worried about interference in the appeals process by the same government officials who interfered at the trial on February 15 and 16.

Take action against this injustice. 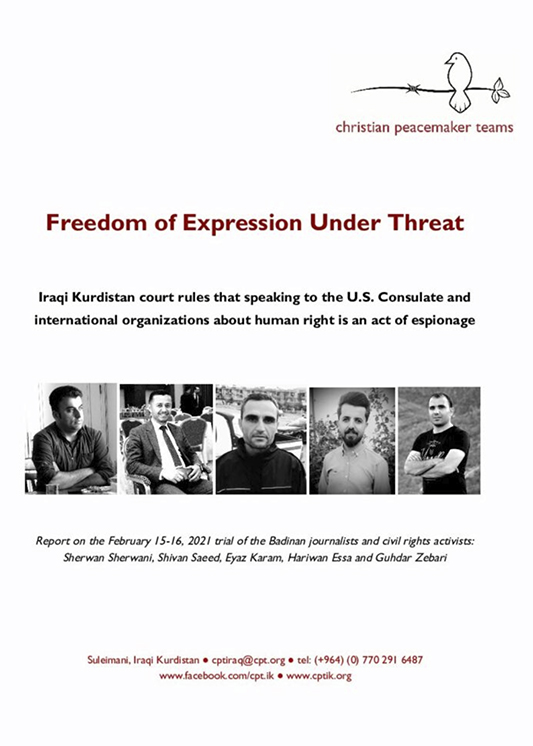 Read Christian Peacemaker Teams’ latest report to learn more about the lack of due process during the Badinan journalist’s and civil rights activists’ trial.

Write to your embassy or consulate in Iraqi Kurdistan.

Click on the country to auto-populate the sample email in your email client, or just copy and paste the email address and the sample letter below. The letter is editable.

Delegation of the European Union to Iraq
delegation-iraq@eeas.europa.eu

Send the following appeal letter to your embassy or consulate in Iraqi Kurdistan. You can write it your own words or use the model.

Sign Amnesty International’s letter asking for the release of the Badinan journalists and activists.