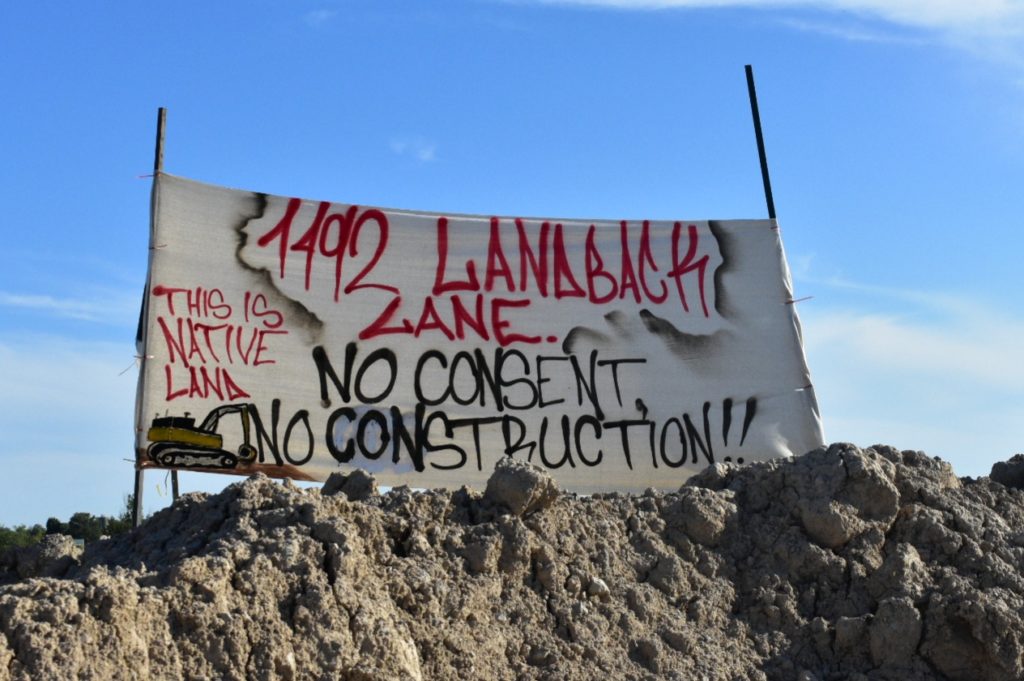 Write to Canadian Prime Minister Justin Trudeau demanding he honor and respect the sovereign rights of the Six Nations people.

The Six Nations land defenders at 1492 Land Back Lane are mobilizing once again to stop another development project —”Mackenzie Meadows,” right on Caledonia’s borders (located in Ontario, Canada). Mackenzie Meadows is within the Haldimand Tract, the land stretching back from the Grand River that was set aside for the Six Nations in 1784 as compensation for 4 million acres lost in the American Revolution, as agreed upon in the Haldimand Proclamation. Since then, the governments of Ontario and Canada have unlawfully sold or seized the vast majority of the Haldimand Tract. Six Nations has tried to get it back. Their Land Claims Research Office has made 29 separate land claims since 1974, but only one has been resolved. To make matters worse, the Federal Government closed the remaining 28 unresolved claims in 1995.

Mackenzie Meadows sits on one of those unresolved claims. According to Haldimand County, the developer and the band council of Six Nations had reached an agreement back in 2019. But land defenders assert that the band council doesn’t represent the people; it’s a system of governance imposed by the Federal Government; this means only a few people participate in that system. Land defenders believe that “action must be taken to stop the ongoing development of our lands.”

Since July 19, 2020, Haudenosaunee Land Defenders from the Six Nations have peacefully reclaimed the Mackenzie Meadows construction site, which they have renamed “1492 Land Back Lane.” On Wednesday, August 5, Ontario Provincial Police (OPP) fired rubber bullets and used tasers on peaceful land defender, arresting nine. But the land defenders have come back and are still there.

Take action and send a letter to Canadian Prime Minister Justin Trudeau, calling on him to denounce the OPP’s actions on August 5, 2020, to meet with representatives from the Six Nations Land Defenders and demand that the Canadian state respect Indigenous law and stop the development of Indigenous Lands.

Spread the word and encourage others to take action.

On July 19 2020, the Land Defenders of Six Nations reclaimed their land under development for a subdivision near Caledonia. The reclaimed land has now been named 1492 Land Back Lane and is a community solidarity and rejuvenation site. 1492 Land Back Lane lies within the Haldimand Tract, the land stretching back from the Grand River that was set aside for the Six Nations in 1784 as compensation for 4 million acres lost in the American Revolution, under the Haldimand Proclamation. The Haldimand Tract is the sovereign territory of the Six Nations.

Since 1784, the governments of Ontario and Canada have unlawfully sold or seized the vast majority of the Haldimand Tract, shrinking the Haudenosaunee territory to a mere fraction of what was agreed. The Six Nations Land Claims Research Office has made 29 separate land claims since 1974, but only one has been resolved, and the Federal Government closed the remaining 28 unresolved claims in 1995.

As if the land confiscation was not enough, on August 5, 2020, the Ontario Provincial Police raided 1492 Land Back Lane using tasers and rubber coated steel bullets against the land defenders, arresting nine.

Using military force against Indigenous people and confiscating their land is not the image of a government that desires reconciliation or peace. Rather, this is a clear statement that colonial violence is the modus operandi of the Canadian government.

I ask you to stop this colonial violence and implement the rights of the Six Nations peoples. Fulfill your promise for a Nation-to-Nation relationship by genuinely working towards reconciliation between Indigenous and non-Indigenous peoples.

Therefore I call on you, the Prime Minister of Canada to take the following steps: